Over the past few weeks, some 55 students from the Media College Amsterdam have been studying the National Holocaust Names Memorial as part of their final exams. On behalf of the Dutch Auschwitz Committee, they were asked to come up with better ways to reach young audiences. To this end they interviewed people of their own age, filmed survivors, made reports at the Westerbork transit camp, spoke to the director of the Resistance Museum, wrote moving articles, made Instagram stories and vlogs, and much, much more. 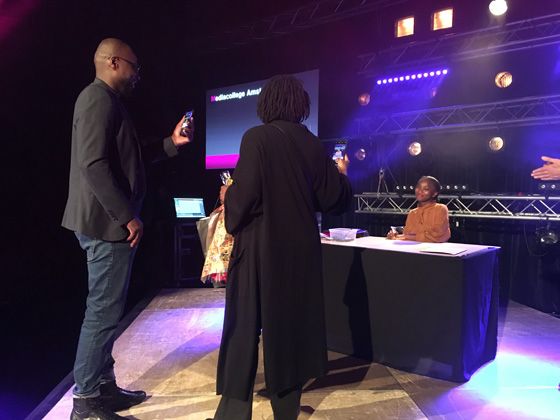 We have been inundated with wonderful and inspiring ideas and recommendations that have taught us a lot about how to convey our message through social media. So much work to be done!

It was fantastic to see 55 motivated young people working so enthusiastically on the meaning of the theme ‘Auschwitz Never Again’. A team from the Dutch Auschwitz Committee joined teachers from the college to review all presentations and discuss them with the students. We are proud of those students and will certainly explore their proposals further. All the students passed their exams. Moreover, the collaboration was so successful that we will probably team up again next year on the final exam assignments.

On 30 September 1941, some 31 students were forced to leave the Amsterdam School of Graphics. Their names are unknown. As part of the graduation of students from the 2019-2020 academic year, the Media College adopted the names of the 31 young people deported from Amsterdam during the Holocaust and murdered in Nazi extermination camps in Poland. The students lived around Dintelstraat, the location of the School of Graphics, the precursor to the current Media College. To mark the occasion, a special certificate was made and presented to all successful exam candidates. 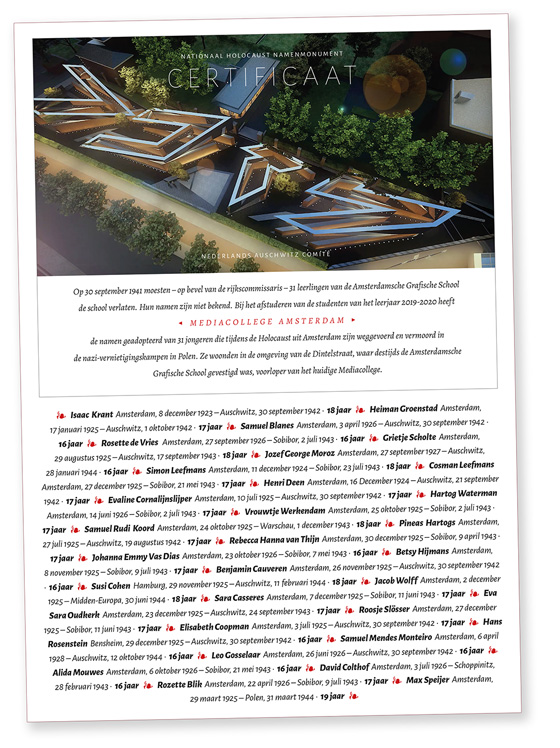 The certificate specially made for students of the Media College who passed their exams.

For the Auschwitz Committee this response from the college was actually what mattered most: “We heard from parents that their son or daughter had taken a genuine interest in the Holocaust, and not simply because it was related to their final examination. So the mission has been very successful.” And we wholeheartedly agree with those final words.

Work on the building site is in full swing. In this photograph by Dirk Spits you can see that the contours of the memorial are already visible.

This page features the latest news on the construction and a livestream connection with the building site. [In Dutch]