The Dutch Holocaust Memorial of Names will be designed by Polish-American architect Daniel Libeskind (Lodz, 1946). In New York, Libeskind said he was ‘honoured’ with the invitation to design a Holocaust memorial for the Netherlands.

The son of Holocaust survivors, Libeskind emigrated with his family to America in 1964. He achieved renown as an architect with his designs for the Jewish Museum in Berlin and the master plan for the reconstruction of the site of the World Trade Center in New York. In May 2013 Libeskind was also appointed architect of a Holocaust memorial in Columbus, the capital of the American state of Ohio. 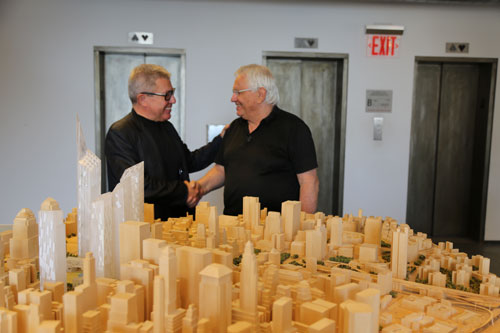 Daniel Libeskind (l.) met in New York with Jacques Grishaver of the Dutch Holocaust Memorial of Names and told him he was 'honoured' with the invitation to design the monument