Last week the completion of the Memorial came a huge step closer when the administrative court dismissed all objections raised by a small group of local residents against the tree-felling permit and building permit. No doubt you read or heard this happy news in one of the numerous media reports on the story. 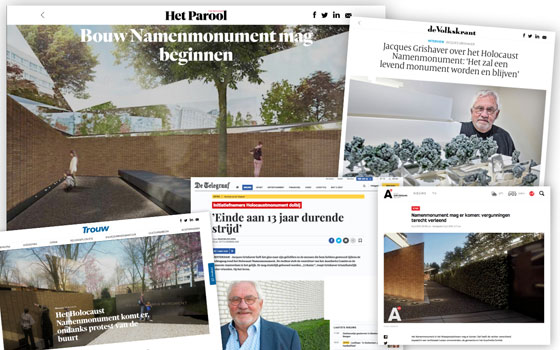 The positive news got attention in serveral Dutch Newspapers

What was it all about?

After a lengthy and painstaking process, the City of Amsterdam earmarked a green strip on Weesperstraat as the site for the Holocaust Names Memorial. On two separate occasions, the entire city council approved this decision as well as the design by Daniel Libeskind: “We want this monument on this site.” The city then issued a tree-felling permit and building permit. But a group of opponents who disagreed with the decision then lodged an appeal. Their objections were considered and dismissed by a municipal appeals committee. The opponents then appealed in court and asked it to grant a preliminary injunction to prevent construction until it had reached a final verdict. The injunction was granted. No trees could be felled pending the court verdict.

After a session of the full chamber of the court, the verdict was announced at 9 am on 9 July. All the objections raised by the opponents were dismissed (as they already had been by the municipal appeals committee). The court concluded that construction of the monument could start.

Is that the end of the matter?

Yes and no. In principle, we can start now. The municipality has indicated that it will begin preparations on 1 August. But... the monument’s opponents could still appeal to the Council of State. In that event, they will again seek a preliminary injunction to prevent construction until a verdict has been reached in that appeal. At present it is unclear whether or not they will appeal, and they say they have not yet taken a decision on the matter, because the court verdict leaves them very little room to manoeuvre.

So another short wait. The court verdict has strengthened our position considerably. Yet an appeal to the Council of State could cause another delay. And further costs! It can’t be helped. In the meantime, we remain very optimistic. We hope we can count on your support.