“The Dutch Auschwitz Committee is strongly convinced that 102.000 victims should be individualized. The city council supports the initiative very much,” the mayor of Amsterdam, Eberhard van der Laan, said in the press conference where architect Daniel Libeskind presented the concept for the Dutch Holocaust Memorial of Names.

“We are in Amsterdam,” he added, “so there has to be a good study and a good discussion about the location. And the better we organize this process, the greater the chance that we will achieve what we have to achieve, which is a worthy monument for the victims of probably the most terrible crime in mankind.”

Bridge to the future

Jacques Grishaver, chairman of the Dutch Auschwitz Committee, explained how he changed ideas with Daniel Libeskind on the possibility of a Memorial of Names. “We had the same thoughts about this,” he said. “We both had the idea we had to do something with a focus on the future. That is how the idea emerged: the one hundred thousand names on this memorial should act as a bridge towards millions in the future, to show new generations where discrimination and antisemitism can lead to.”

Grishaver closed with this remark: “We always say: As soon as your name isn’t mentioned anymore, you’re forgotten. Among the one hundred thousand names are tens of thousands of names of people without any family left. These names will be forgotten forever and that is something we all together have to prevent.”

In his introduction architect Daniel Libeskind mentioned his personal involvement: “I didn’t come to this project through scholarship, through research, though libraries, or through archives, because I lived in the void of the Holocaust. My parents were the only survivors of their larges families in Poland. To me the Holocaust is not just one more event or a tragedy in history. It is an event that in a seismic way has shifted our sense of what humanity is capable of.”

The extermination of an entire people can not simply be generized by saying ‘Never again’, he said. Instead we have to create something to keep the memory alive. “The names allow us to think of every individual, every child, every person who was murdered just because he belonged to the Jews or the Roma and Sinti.”

Libeskind qualified the Broken Mirror memorial by Jan Wolkers “a beautiful monument” that in his view can be the entrance to the Memorial of Names. “So, it is not a competition of memory, it is really an enhancement of memory,” he said.

To Libeskind the Wertheim Park is the perfect location for the monument, “which is really about the beautiful every day life. You see people eating lunch, people taking a walk in the park, living in the neighbourhood. I think it is appropriate, exactly because it is about everyday life to remember and to pass on the difficult and yet meaningful lesson about our future and because we are lucky to live in a free society.” 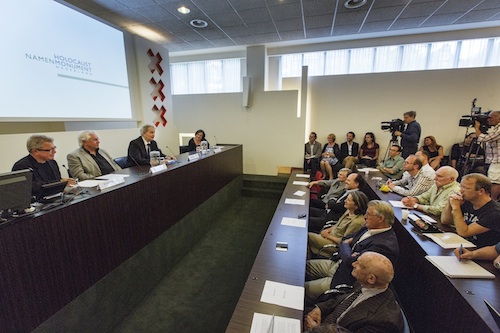