The Weesperstraat site is located on the eastern side of Amsterdam city centre, very close to Jonas Daniël Meijerplein, on the edge of the Plantage and Weesper districts. The history of this area is closely linked to the history of Jews in Amsterdam. Located within walking distance of the site are monuments and notable buildings that, each in its own way, illuminate some aspect of Jewish history. Before the Second World War, practically everybody who lived on Weesperstraat was Jewish. 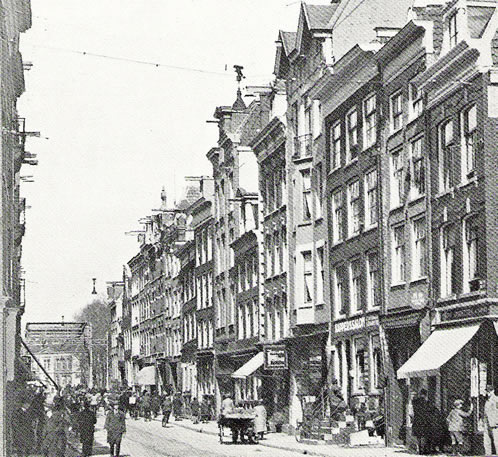 Old photographs show a bustling, chaotic and vibrant street of homes and shops. This was the thriving heart of the old Jewish quarter. After the liberation in 1945 this once so busy and prosperous street was left deserted and neglected. The city council drew up redevelopment plans. Homes were demolished, new buildings erected, and a busy traffic artery constructed. A green verge between Nieuwe Herengracht and Nieuwe Keizersgracht remained open, however. And this is now the site earmarked by Amsterdam city council for the National Holocaust Memorial of Names, a site at the centre of the once so bustling, chaotic, thriving Jewish quarter!

There are many reasons why Weesperstraat is such an appropriate site for the Memorial of Names. Located on the edge of the Plantage and Weesper districts, the site is steeped in the history of Jews in Amsterdam. A memorial on this site will improve the public space of this stretch of Weesperstraat. Erecting the National Holocaust Memorial of Names here will transform the area from an anonymous thoroughfare into a place laden with significance.