On 12 May 2009 I visited the former Nazi extermination camp Auschwitz-Birkenau, the world’s most infamous symbol of terror, genocide and the Holocaust. An atmosphere of foreboding still hangs in the air at this ‘Anus Mundi’, as an SS doctor once put it. The entrance building to Auschwitz-Birkenau in particular looks lugubrious to the visitor.

On the site of the storage barracks there is a bathhouse where new prisoners not sent straight to the gas chamber selected for slave labour were literally and figuratively stripped of their identity and of everything connected with their lives up to that point. Naked, they were reduced to nothing but a number, a living number that could be used at will.

In the last space of that building, the visitor suddenly stands in front of a large wall covered in about 350 framed photographs. Original photographs taken to Auschwitz-Birkenau by deported people and found in their suitcases and bags. 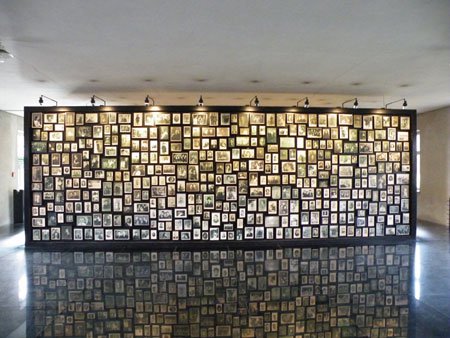 Although there are plenty of informal snapshots, most of the pictures are official portrait photographs: of a friendly man, of two grandparents, of a beautiful girl, of a young mother with two cute daughters. People whose only crime was that they were Jewish. All murdered. Bewildered, I touched a few of the pictures as tears stream down my cheeks. Various emotions vied for supremacy: poignancy, sadness, outrage, anger. All those people, all those beautiful people...

I have a copy of a book of photographs containing all those pictures found in Auschwitz-Birkenau, some 2400 in total. The people in the pictures on the wall of photographs in the sauna are of course the people for whom the extermination camps were built: Jews who had to be erased from the face of the earth. In almost all books about the Holocaust, the victims, with very few exceptions, are spoken of in terms of numbers alone. While the individual perpetrators and the crimes they committed have been extensively documented and discussed in countless texts, their victims have disappeared anonymously, their names often no longer even traceable. This album of pictures does at least give a face to 2400 of them. That is why this invaluable album is a fitting tribute to the millions of innocent people who, as the photos show, once led an ordinary, everyday, happy lives, with normal hopes for the future, and with the normal desires to grow old among their loved ones. Anti-Semitism put an abrupt end to that, and to the life of 12-year-old Esther Roos. I don’t have a picture of her, but thanks to my certificate from the Holocaust Names Memorial, she will not be forgotten.