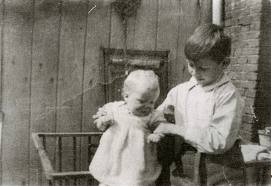 This is a picture taken in 1943.  The baby is me, Heleena van Raan (now nearing 73) the young boy is Rudy Klijnkramer age about 9 or 10 (now 82).  He was  hidden with another child by my parents Ger and Gerard van Raan.  The story they told anyone who asked was that the two children were my father's nephews and that their mother was in a TB sanatorium.

My parents have been honored by Yad Vashem for sheltering these two children.

Our family came to the US in the early 1950's from Den Haag. We are still in close touch with the Klijnkramer's.  He is the father of two and grandfather of six. Both of his parents survived although many relatives were murdered.

I am proud and pleased to have "adopted" two that did not survive, friends of my parents. Sigmund Boekdruker and Sybille Haber.

The article in the New York Times made note of the Namenmonument and Rudy sent me a link to this website.
In addition to hiding the two children my parents participated in several resistance activities.  Three years ago I traveled with my daughter to Nederland and donated my father's papers to the Resistance Museum which stands as a testimony to those who did resist.  It was painful to acknowledge as per the NYTimes article how many Dutch Jews perished and how the image of resistance has been inflated over time. 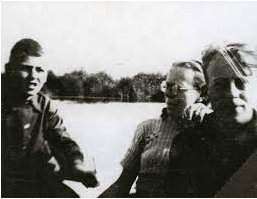 Rudy Klijnkramer, Ger Lubach van Raan and Gerard van Raan--to the extent that they could they kept his life as normal as possible.  Although many times they feared some one would report them.
My parents are both dead but their legacy lives on in their children and grandchildren.