Ro was my mother’s younger sister; she had a very unhappy life and she was the first in the family to be deported and murdered, on August 3rd in the first Auschwitz gas chamber at the age of 38. She had responded to the Nazi call-up to report for “labour in Germany”.

She lived in Rotterdam at the family home where I was born on Bergweg 99 where she had her own room on my grandparent’s floor.

Rosetta as a teenager

She was totally withdrawn and had virtually no social life and she always wore a girl scout uniform heavy wool knee high socks and sandals. This was because male clothing was totally taboo at the time; her voice was very deep and I believe now that she may have been a trans sexual or in any event a lesbian. I was told that her parents had been dragging her to a number of doctors, of course with no result and therefore she ended up as a virtual hermit – usually disappearing to her room – I think she was doing some secretarial work, perhaps for my grandparents’ business.

Of course at the age of between toddler and preschooler I was too young to understand, but I was curious and eager to please her.
I enclose a picture of her as a teenager when she wore semi – masculine clothing and also a photo taken ca. 1932 on a rare outing with her, my mother, older sister and myself as a toddler. 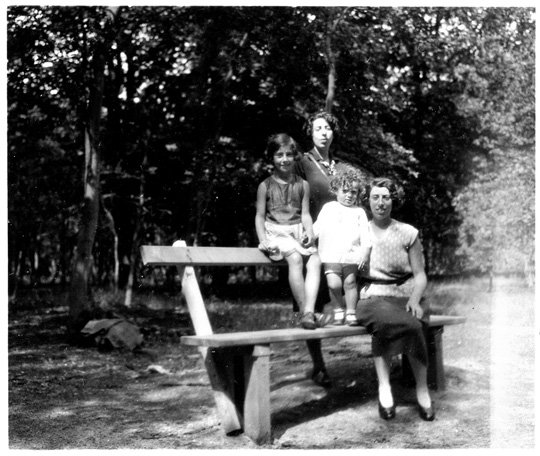 My parents, sister and I were the only ones to survive, having escaped detection for about 2 1/2 years in hiding. A few years ago I visited Auschwitz and learned there that she never reached the Birkenau gas chambers because they were not yet in operation on August 3, 1942. I To my utter consternation I was informed of this when standing in that very gas chamber, the only one that had not been destroyed, feeling deeply sad about my aunt.

I also adopted the names of my grandfather Izaak van Dam, my aunt Sofie Wittmann-Stein and my little niece Emmy Rozetta van Dam, I posted their stories in Dutch; I also plan to adopt the names of my uncle Maurits (Mozes) van Dam and my aunt Rachel van Dam-Leons.
I live since 1959 in Greater Vancouver BC, Canada, where I am active in the Vancouver Holocaust Education Society – I have been speaking in schools for at least 25 years.

About Emmy (in Dutch)

About Sofie, her husband Emanuel and son Friedrich (in Dutch)