I am Marianne van Embden and my best friend is Phili Bollegraaf. We’ve known each other for over 30 years and my family was also close friends with her parents, Barend and Joke Bollegraaf-Creveld. Mrs Bollegraaf sometimes spoke about her time in hiding, but Mr Bollegraaf had a lot of difficulty talking about it. He did speak a few times, and told us about his youngest brother Heiman, who was betrayed at the end of the war. A terrible drama, because the other three brothers did survive the war. Barend, Nathan and Hartje. 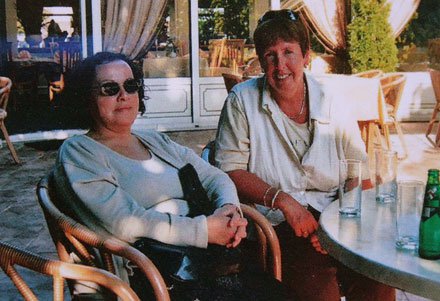 Phili Bollegraaf (a daughter of a brother of uncle Heiman) and myself, Marianne van Embden

In 2005 Phili and I travelled with the Auschwitz Committee to Auschwitz, where we commemorated the murdered members of her family (and all other victims).

At the end of the afternoon we were walking through the camp when, right in the middle, an Israeli military band was playing the Israeli national anthem, a moment never to forget.