I adopted the names of Lydia van der Zijl-Salomons and her three sons Philipp, Leon and Emanuel on the National Memorial of Names, that will be build in Amsterdam. Lydia and her three boys were murdered on November 2, 1943 in Auschwitz. 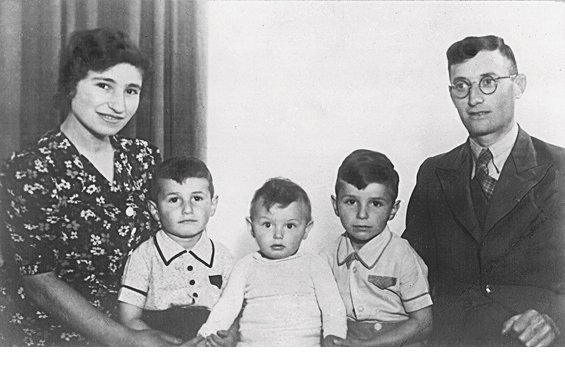 Alfred van der Zijl, their husband and father, survived the war and died in 1998. Actually, I could have met him and talked to him about his camp mate Siegfried, my uncle whom I never knew, except in photos. But before 1998 I didn't know anything about Alfred's existence. Only after I discovered a Dutch letter from 1945 in the papers of my mother, who died in 1999, I started to look further.

I come from a German Jewish family, from both sides. Immediately after the war, my mother and her parents who survived the war searched in France what had happened to the missing people in the family. Probably through the Red Cross, my mother came into contact with a witness to the death of her younger brother Siegfried. According to the letter written this A. v.d. Zijl, Cereskade 203 Oude Pekela, written in Dutch on August 26, 1945, Siegfried died on April 7, 1945 of weakness and malnutrition (my mother did not speak Dutch, but she must have been able to understand the content). The death date is a few days later than in the official form of Siegfried which was seized with the camp archives (it is online on the Arolsen site). Because of the chaos in the camp, it seems a wrong date was etched in his memory.
Van der Zijl had number 124830 in the Langenstein-Zwieberge camp (he writes Zwiebergen Langenstein near Halberstadt). The lists have been preserved. On that list he is indicated as Alfred van der Zyl. The next two numbers 124831 and 124832 belong to Leo Weinhausen and my uncle Siegfried. So the three of them stood behind each other to register. The conclusion must be that they were camp buddies and they hung around together. There was much in their background that connected them. All three of them had been forced laborers at the Blechhammer labor camp near Auschwitz. 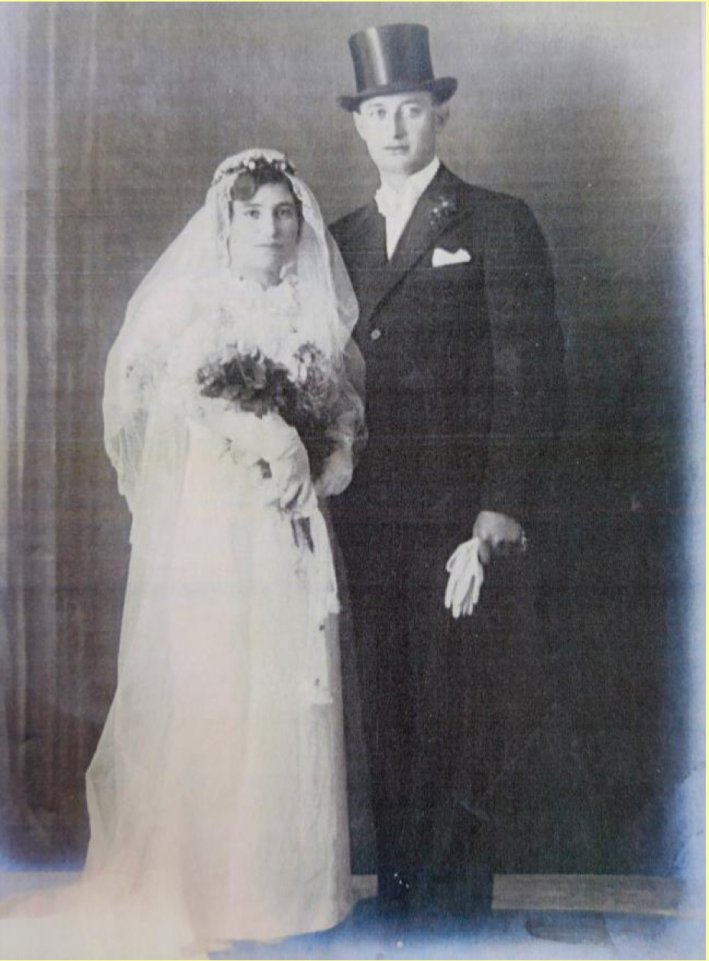 All three were cattle traders. Leo Weinhausen was a second cousin of Siegfried, whom he had bumped into at the French camp Drancy. Both were young men in the prime of their lives, born in 1914 and 1915.
Siegfried and Leo were taken from the train with other men at the freight station of the Polish Cosel and taken out of the train with great violence by SS men chasing the prisoners with barking dogs. All the men selected were taken to a labor camp. After Cosel, the train continued to Auschwitz, its final destination.
Alfred writes that one brother has survived from his family and that he has heard nothing from his wife and children.

Who is this Alfred van der Zijl?
Alfred van der Zijl was born on December 5, 1907 in Weener, a German East Frisian village near the border. His parents Philipp and Amalia (born Hertz) then have a butcher shop on the main street of the village. Weener has a thriving Jewish community. Alfred married Lydia Salomons in 1936 and took over the management of the butcher shop in 1937. In August 1937, his son Philipp was born. The situation worsened every day as a result of anti-Jewish measures. Alfred tries to prepare for his flight by selling as much as possible, but is arrested and detained in the Börgersmoor (Eemsland) concentration camp. He was released by payment of a fine, but when it became clear that the Jewish assets would be taken away, the whole family fled to Oude Pekela, where Alfred's sister Auguste settled after her marriage to the butcher Jeizel Kosses in 1925. Brother Robert already left for the Netherlands in 1935. Leon, Alfred's second son, was born in 1938.

The family lived so close to the border that they could experience how the rampage of the "Kristallnacht" had completely destroyed Jewish life in Weener.
Alfred becomes a cattle dealer in Oud Pekela, on the Dutch side of the border. When his third son is born, the Netherlands is already occupied. In 1941 the family lives on Wedderweg 24 in Oude Pekela, a village with a rich Jewish life. At the peak in 1870, both Pekelas had 401 Jews. At that time there was an extensive association life. After that, the number of Jews declined rapidly due to changing social and economic conditions. In 1942 both villages still had 150 Jews. They were deported between August and December 1942. Only 12 of them survived the war.
Alfred and his family went to a hiding place offered by a farmer, but they had to find another shelter in August 1942. While he was underway looking for a new place, Alfred's wife and children were arrested and imprisoned in Westerbork as criminal cases (which happened to all Jews whose hiding place was discovered). In order not to let them down, Alfred volunteered to come and stay with them in Westerbork. This was for a short time only. On October 30, 1942 he was transported to Auschwitz with his wife and children. But in Cosel (now Kozle), approximately 200 men are taken from the train to be used as forced labourers, as Siegfried and Leo had been. Alfred is chased onto a truck to the Sint Annaberg labor camp where his head is shaved and he gets prisoner clothes. Alfred's wife and children travel on to Auschwitz and are directed from the train to the gas chambers upon arrival. Their official date of death is November 2, 1942 (established in 1951).
Alfred's father Philipp and mother Amalia van der Zijl-Hertz were taken to Westerbork on the night of 11 to 12 November 1942. Amalia died in Westerbork on March 3, 1943 and is buried in Assen. Philipp was killed in Sobibor on March 20, 1943.
Alfred was assigned the number 179140 in the Auschwitz system. He was employed as a forced laborer in Blechhammer (Blachnowia in Polish), a large camp near the chemical plant on the other side of the track.

After the chaos caused by air raids by the Allies, Alfred and 24 others manage to escape from the camp. But through the efforts of fanatical boys of the Hitlerjugend he is arrested and taken to Buchenwald. From there a train transport follows in the direction of Braunschweig. Alfred finds a cousin among the prisoners, with whom he tries to escape again. His cousin is shot by a security guard and Alfred survives by smearing himself in his cousin's blood and remaining silent. Yet his freedom does not last long. He is caught again and then taken to Langenstein-Zwieberge. There he stays with Siegfried and Leo until they die, at the beginning of April 1945. On April 9, 1945, all prisoners who are still able to walk are sent to death march, while on April 11, the camp is liberated. Alfred connects with resistance fighters and moves to Halberstadt. There he is helped with food and clothing by a German woman (with whom he kept in touch after the war). After the defeat of the German Reich, Alfred leaves for the Netherlands, where he arrives in Valkenburg (in the southern province of Limburg) during the summer. He would have liked to have traveled to Groningen (which is hundred of kilometers away) but is forced to remain in quarantine. He also managed to escape from there, after which he ends up in Veendam. With a borrowed bicycle he leaves for Oude Pekela, which is not very far from Veendam. He does not find any of family member, but he is taken care of by Benni Levi's family in Nieuwe Pekela, until he is assigned a home. His brother Robert has in the meantime also moved to Oude Pekela and they find each other again. Robert meets a partner whom he is going to marry and at the wedding Alfred gets to know the non-Jewish German Erna Reiss, with whom he starts a relationship. Erna had refused to submit to Nazi laws and abandoned her Jewish fiancé. She had emigrated to the Netherlands. Alfred and Erna can marry only after the death of Alfred's wife Lydia has been officially recognized, but already in 1947 a son is born who sadly dies after two days. However, Alfred and Erna become the parents of two sons and grandparents of five grandchildren.

Alfred died in 1998. The ill-treatment he had suffered during the war took its toll. He had severe back pains all the time. He chose to voluntarily step out of life.He died too early to be able to witness the laying of the Stumbling Stones for his family. There are many: for Lydia and their three sons, for his father Philipp and mother Amalia, for his sister Auguste, her husband Jeizel and their daughters Betsie and Amalie, for his sister Helene, her husband Erich de Vries and their daughter Marga.
Adopting the names of Lydia, Philipp, Leon and Emanuel is also a tribute to the incredibly brave and loyal man Alfred van der Zijl has been.