The mother and seven brothers and sisters of my grandfather Jacob Mozes van Gelderen were all killed. He survived, because he was married to a non-Jewish woman. 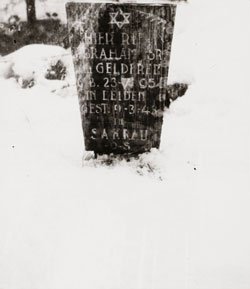 One of his brothers, Abraham, who worked as a warehouse clerk in Amsterdam, ended up in Zakrzow labour camp, near Auschwitz, where a small group of Jewish men aged between 8 and 50 worked in miserable conditions on the construction of German motorways.

He died and was buried at this camp on 9 March 1943. He was 47. Remarkably, there exists a photo of his grave, taken shortly after the war by a member of the Red Cross. Unfortunately, I have not been able to trace that grave. 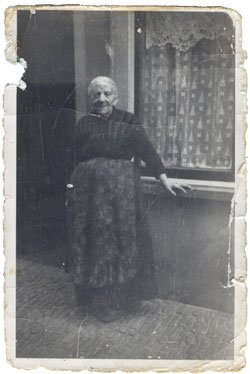 I adopt my great-grandmother Rosetta van Gelderen-de Leeuw, who was transported on 1 March 1943 from the Joodse Invalide, an institution for elderly Jews, to Westerbork. She was murdered in Sobibor on 13 March. She was 89.